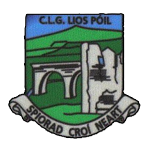 Lios Póil 1:11
Ballydonoghue 2:09
It was a case of thuas seal agus thíos seal as Lios Póil went from the highs of last week to a narrow one point loss against Ballydonoghue. Playing at home Lios Póil were the first to score when Garreth Ó Nuanáin pointed from a free, only for it to be swiftly cancelled out by Ballydonoghue. This proved to be a recurring theme as neither team could be separated for the remainder of half with Adrian Ó Raoil pointing and Ciarán Ó Súilleabháin amoung the scorers for Lios Póil. For Ballydonughue Paul Kenelly with a free and Damien O Carroll scoring two points from play, which ensured that the halftime score was Lios Póil 0:05, Ballydonoghue 0:05.
At the start of the second half ,Lios Póil were struck a deadly blow as Ballydonoghue registered two goals in the opening three minutes Jim Greaney and Eamon Walsh. Despite this blow Lios Póil did their best to reduce the margin and by the end of the first quarter were only four points behind thanks largely to two Ciarán Ó Súilleabháin frees. Despite this though Ballydonghue extended the lead to five points when Paul Kennelly pointed for them. Lios Póil though kept creating chances and it paid off as a 1:01 from Tomás Ó Caomhánaigh ensured it was still all to play right up to the final whistle as the match finished Lios Póil 1:11 Ballydonghue 2:09